I’ve been rather busy over the past couple of months.  Not busy with work or travel, but trying to keep up with changing schedules and changing routines.  While I’ve had a lot of fun, a bit of drama, and some heartbreak, I’ve also experienced a lot more of DTLA and beyond.  My more recent experiences made me a true believer in fate, destiny and signs from above.

As some of you know, or have seen me write about in the past, my dad passed away July 2010.  Before that, in June 2010, I lost a mentor – a guy larger than life who gave me direction when I was a wee baby of 23 and believed in my abilities far beyond anything I saw possible for myself.  Suffice it to say, losing two of the people I relied on and trusted most in this world left me a little lost.  Who was going to give me advice about what to do next?  Who would be there when I needed help and support in the future?

More than a year has passed and I still find myself asking my dad and my mentor questions, but I was always hit with silence in return.  What was I expecting to hear, right?  I’m just some girl shouting at the sky asking for a sign.

Then I took a trip to Coffee Bean on 5thand Grand with a very good friend.  We were talking while waiting for our caffeinated beverages when a woman turned around and said 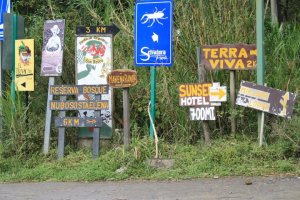 to my friend, “You’re a very attractive man.”  My friend blushed from head to toe.  “You have a good soul and aura surrounding you,” she continued.  My friend seemed a little taken aback by the statements, so I stepped in and said, “he is a good soul, that’s why I keep him around.”  The conversation progressed to include her experiences in the Vietnam War, her beliefs in the cycles from life to death and back, and finally an edict to me to do yoga every day.  I asked if she could tell I was stressed out.  She said, “honey, I am 68 years old and I’ve learned that yoga every day eases the mind and the soul.”  I’m sorry to say I have not taken this advice yet.

I left the Coffee Bean thinking I was really happy I met this woman.

A week later I was making one of my regular trips to Culver City to see my roommate and other friends at a restaurant there.  I make it a point to go visit on Sundays when the patron traffic is low and I can sit at the corner of the bar while people rotate in to talk.  I was running late leaving my apartment and missed the first Rapid Transit 733 heading west.  I decided not to grab the local connection opting to wait on the next Rapid Transit thinking I could get there faster.  When I got onto the 733, I took a seat near the back.  Three stops later, who gets on but the same woman I met in Coffee Bean.  I thought “what a small world we are both on the same bus.”  Forty-five minutes later my stop was approaching.  Someone else already pulled the chord to light the “Stop Requested” sign, so I sat quietly and waited.  When the doors opened, I headed to the exit only to see that this woman was exiting the bus too.  As we got off I smiled and said, “Have a good night.”  She smiled and said, “Why you have a blessed night, too.”

A week after that, things happened that had me asking my dad and mentor for some guidance.  It was the Thursday before Halloween.  It began as any other day but ended in emotional upheaval.  So Saturday I did the only thing I thought I could do.  LAX CarShare became my escape hatch and I decided to leave DTLA for a while.

I was crossing the light at Broadway and 5th heading to Pershing Square to pick up the car when I saw the woman again.  We both looked at each other and stopped.  “I’ve seen you before many times, haven’t I,” she said.  I smiled and looked down at my feet, “Yes, in fact this is the third time we’ve run into each other.”  “You were on the bus to Culver City, weren’t you,” she asked.  “Oh yes, that was me,” I responded.  She laughed a little and said “that night I wanted to turn around and tell you how lovely you are.  You have this ability to make people feel welcome and safe, did you know that?”  “No, I mean I try to be friendly, but I’ve never thought of it that way,” I said.  “Why do you do that?  Why are you so amiable?” she asked.  “I guess if my options are to ignore you and be rude or say hello, I’m going to say hello.  You never know who you’ll meet or what they will be in your life if you are closed off all the time,” I said.

Feeling a little ridiculous that I was having this conversation with a stranger I made a move to leave, but she held strong.  She gave me her name and I gave her mine.  We stood there for a long time talking about spirituality and life.

Then she said something that left me speechless.  “I have something to tell you, no I have something I have to tell you.”  Initially, I was a little wary.  But then she continued, “Do you know what happens in relationships between men and women?  Their physical attractions bring them together and create a connection.  Eventually people think it’s a strong bond or even love, but it’s just an attachment to the other person.  There is nothing wrong with that.  But, do you know what the opposite of attachment is for you right now?  Pain.  You are going to feel pain.  But don’t worry you’re not alone.  There are people surrounding you who love you.  I know you don’t see them right now, but they are there.”

I thanked her for her words and said I really had to go.  I told her I looked forward to the next time we would run into each other.  I haven’t seen her since that day.

Why do I believe in fate, destiny and signs from above?  Because I got one.

Thanks for the message.

Blogs Near To My Heart

For the Creative Mind